The program will invoke the ecstasy of the Bhakti tradition with a series of inspired bhajans (chants) from the treasure trove of the Maharashtrian, Vaishnava, Vedantic and Shaiva devotional traditions. All the chants will be explained, their context in the spiritual heritage elucidated and the experience of their transformational power transmitted. The brief 2-hour program will be power packed and unforgettable. A Gainesville first at Searchlight Yoga Studio. 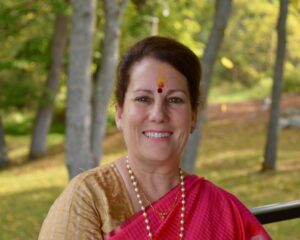 Worldwide Inspiration for the Path of Devotion

Devayani began her spiritual journey way back in 1978 when she met Baba Muktananda, the world-renowned Guru who brought about a “meditation revolution” in the 1970s-80s. Ever since, she has lived in traditional ashrams (spiritual sanctuary) in both India and the USA devoting her life to authentic spiritual practice and constant service of others. She has been a practitioner of meditation and kirtan (chanting) for over four decades and is acknowledged for her devotional singing, having led thousands of people into ecstatic kirtan through her chanting programs, as she tirelessly travels worldwide.

Since the early 1980s, she has been traveling the world on satsang tours with Gurudev Nityananda, Baba Muktananda’s successor, to spread the eternal teachings and practices of meditation and kirtan through the Bhakti tradition.

Her lifelong service to this noble mission has played an instrumental role in the development of Shanti Mandir (‘Temple of Peace’), a non-profit spiritual-charitable organization founded in 1987. She is the Vice president of the organization, which has four ashrams around the world. Currently, she is the administrator of the beautiful 294-acre ashram located in Walden, upstate New York. From there she continues to welcome and inspire all who come to the path of yoga. She enthusiastically embodies joy and love of the Bhakti tradition and inspires people to embrace the practice of kirtan to have a direct experience of the divine love that dwells within and share it with others.

GET YOUR FREE MEDITATION GUIDE